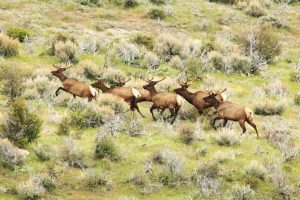 Colorado Parks and Wildlife officials are grappling with how to find new revenue streams amid budget cuts and millions of dollars worth of deferred maintenance stacking up at its dams and fisheries just in time for thousands of orange- and camouflage-clad hunters prepare to head to the woods next weekend for the start of big-game rifle season.

During a series of 18 “Funding the Future” meetings across the state this summer, wildlife managers explained the dire situation of a Colorado Wildlife budget that’s been slashed by $40 million since 2009 and yet still faces a budget shortfall of $15 million to $20 million by 2023.

Without a fee increase for in-state hunting and fishing licenses, CPW would lose access to thousands of acres it leases for hunting and fishing and wildlife conservation efforts would be compromised, wildlife managers say. How much of a fee increase Colorado hunters and anglers could see will be up to lawmakers next year, and though Fort Collins sportsmen have been supportive of an increase, they worry a steep hike could price out some hunters and turn off an already tuned-out younger generation that’s not interested in hunting.

“I understand the budgetary needs, but certainly hunter recruitment and retention should be an extremely high priority,” said Steve Hilde of Loveland, who is worried the sporting traditions passed down from generations may be in danger as fewer younger people take up hunting and fishing.

Compounding the issue, Colorado’s hunting base is aging — average age of 55, according to CPW — with fewer younger hunters waiting in the wings. The National Shooting Sports Foundation says for every 100 Colorado hunters today, only 70 are expected to take their place in the next generation.

“We need to do a better job in general of getting kids outside and keep them away from the Xbox and sitting on their iPads all day,” said Hilde, who is a member of the three-person CPW sportsmen’s round table representing Northeast Colorado.

Joining him on the round table is 26-year-old Ryan Urie of Windsor who said hunting’s biggest obstacle to attracting a younger audience is overcoming a culture that views hunting as an archaic, violent form of recreation.

“It’s got to come with some kind of societal acceptance,” said Urie, a Colorado State University graduate. “It’s socially acceptable to sit on the couch all night drinking Mountain Dew and shooting each other up playing ‘Call of Duty,’ but it isn’t socially acceptable to get up at 4 in the morning to hike in the woods to match wits with an animal and put food on the table. I’m not 100 percent sure how to change that.”

Raising license prices just adds another barrier to attracting youngsters to hunting and fishing, said Urie, who supports an incremental fee increase, but not immediately tying license fees to the consumer price index, which would raise the elk tag price to $88 — nearly doubling today’s $49 price for Colorado residents.

Hunters’ licenses and fees — including a required $10 Habitat Stamp — help the agency manage the state’s elks and deer populations. The animals, without an abundance of natural predators such as wolves or bears, become too abundant and susceptible to ailments such as chronic wasting disease, said CPW Wildlife Manager Ty Petersburg.

What frustrates many sportsmen about a potential hike in license fees is the fear they’ll have to shoulder an even greater load in funding Colorado’s wildlife management efforts, while other recreators, such as bird watchers and wildlife photographers, enjoy the animals without pitching in a nickel for a Habitat Stamp.

“That just rubs me wrong,” said Bill Tourte, who moved to Wellington from California five years ago.

Petersburg, at the “Funding the Future” meeting in Fort Collins in August, said enforcing new fees and passes for other recreators such as hikers and mountain bikers could prove too tough of a logistical task for CPW and Forest Service staff, however, the agency is taking any and all ideas. He and other wildlife officials will present a summary of the public feedback to CPW’s agency board in November.

Hilde urged sportsmen to keep the comments coming and continue the discussion before Colorado’s hunting and fishing access is taken away.

“We need to, as a community, get off our butts and figure out how we can participate,” he said.

This entry was posted in fishing, hunting and tagged colorado license fees. Bookmark the permalink.