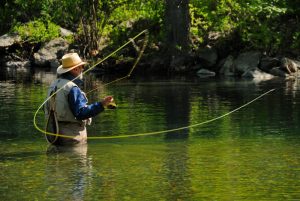 Beneath the steep, red walls of this mountainous valley, Norman Maktima drifts his dry-dropper rig through a deep riffle in an undisclosed section of the Eagle River.

(I would tell you where it is, but then I would have to hide you.)

This slice of public water has been hit hard in recent days – “Hammered,” Maktima says – and the five anglers from the U.S. national fly-fishing team are prepared for a challenging afternoon. Team USA (yes, that’s a thing) is in an intense, all-hands-on-deck practice session (yes, also a thing) for the biggest event on the competitive fly-fishing calendar.

This week in Eagle County is their Olympics. The 36th FIPS-Mouche World Fly Fishing Championships welcomes the best of the best in competitive fly-fishing: More than 200 anglers from 25 nations, spread out over beats on the Eagle, Colorado and Blue rivers and nearby stillwaters. They hold team meetings over fly-tying vises. They compare notes (“If one guy moved fish on streamers, he’ll tell us between sessions,” says Josh Graffam, a Lafayette resident and member of Team USA). They seek rainbows (the trout) and gold (the medal).

Once an also-ran, Team USA now is an international force on the circuit. The U.S. finished second last year in the World Championships. In 2015, to prepare for Bosnia’s spring creeks, U.S. team members fished the spring creeks of Pennsylvania. Now the competition is on their home waters – only the second time the Worlds have been hosted in the U.S., and big thanks to organizers John and Jodi Knight for bringing it home – and the Americans are among the favorites. The competition runs through Friday with the medal ceremony Saturday.

“What was that (fish) on, Norman?” Graffam asks his practice partner, Maktima, from across the clear, low flows of the Eagle.

“The dropper. Nothing on top yet,” Maktima says as he releases a healthy rainbow.

Until Tuesday evening, I considered myself an educated angler, someone who believes a day on the water to be a necessary ingredient in life and more than a hobby.

Truth is, I knew nothing – not about competitive fly-fishing, anyway. Theirs is an entire subculture of the sport, complete with a unique set of rules, fierce national pride and world-class anglers who could catch fish in a bathtub that isn’t stocked.

Watching these guys work a stretch of river was both humbling and enlightening.

Whipping a 10-foot, 3-weight Sage rod through a breeze – stiff enough the river’s current appeared to be moving upstream – Graffam spots a rainbow in skinny water. One cast later, the 14-inch trout is in his net and quickly released, without the angler handling the fish. Competitive anglers are penalized for killing a trout.

Take a seasoned guide from a nearby shop, or a local angler who knows the water, and he or she probably would find similar results. But it’s the rulebook associated with FIPS-Mouche events that separates competitive fly-fishers from folks such as me.

Their version of the sport is unlike any I’ve seen. Participants are prohibited from using split shot, relying instead on weighted flies, and strike indicators are a no-no. The points system is based on numbers of fish caught and released, as well as size.

Competitive fly-fishing is akin to a scratch golfer who plays Augusta National with only a 7-iron; a pool shark who plays blindfolded; a tennis star who employs only his or her backhand.

“For me, competitive fly-fishing took fly-fishing to another level,” says Graffam, the only Colorado resident on the U.S. national team. “It’s a different type of challenge. It makes you appreciate detail, to see things you wouldn’t normally pay attention to. Later (in a competition week), the fishing can be really tough. The water has been hit hard by some of the best in the world. That’s when the challenge really sets in.”

Spain is the reigning world champion. France and England are usually challengers, and Italy often is in the mix. It wasn’t until the past decade that the U.S. graduated to international contender, though the Americans still are searching for their first gold. Last year’s silver was the top finish for the U.S. at the World Championships.

OK, somebody had to ask: Is there trash talk in competitive fly-fishing?

“There are certain teams that you want to beat more than others,” Graffam says with a laugh.

That’s where the Czechs come in. In the fascinating world of competitive fly-fishing, the Czech Republic is the New England Patriots, New York Yankees and Detroit Red Wings all rolled into a Simms chest pack. Who knew? The Czechs have won six of the past 10 World Championships and, over that same period, failed to medal only twice.

Maktima, who guides out of High Desert Anglers in Santa Fe, N.M., is a former world junior champion. As a typical Colorado thunderstorm rolls over the red canyon walls and into the valley, threatening to blow the anglers off the water, Maktima persuades another rainbow trout to take a tiny midge pattern tied below a dry fly.

Klee is the Denver sports (and sometimes

outdoors) columnist for The Gazette.

Reach him via email (paul.klee@gazette.com)

This entry was posted in fishing and tagged fly fishing colorado. Bookmark the permalink.