Dove hunting season off to a good start in Colorado 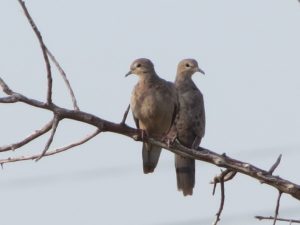 Dove hunting in Colorado opened Thursday, the traditional opener serving as a tuneup of sorts for the duck, goose, pheasant and quail seasons to come.

Opening day found our group of seven tuning up in the Arkansas Valley near my hometown of La Junta. This beautiful southeast part of our colorful state is a diverse area containing vast open plains dotted with farmlands. In the western sector it breaks into historic canyons carved from the creeks and rivers over centuries of erosion. Portions of southeast Colorado would be a semi-arid, desert area would it not be for the Arkansas River flowing directly east from Pueblo and providing an oasis of croplands.

It was near Rocky Ford where we pursued doves.

Southeast Colorado commonly holds temperatures 10 to 15 degrees above the northern Front Range, and when it comes to doves, a bird that packs bags early once temperatures cools, it’s an area that holds more doves for a longer time than the northeast part of our state.

Opening day found an uncommon cool morning with moderate humidity and fog. The birds initially were slow to fly and bunched-up in area cottonwood trees, deadfall and along utility lines. As the temperature climbed and the fog lifted, doves started flying. Several of our group had their 15 bird limit by midmorning along with additional Eurasian, or collared doves, which has no limit and does not count against a hunter’s bag limit. The total count was 87 mourning doves by midmorning and 62 Eurasians.

For dove hunting in southeast Colorado, I’d recommend several of the state wildlife areas especially those near Rocky Ford, Las Animas and Lamar. Access to private lands can be found with prior coordination and permission. I’d also recommend that hunters headed to the southeast part of the state bring plenty of mosquito repellent, as counties in that area have the highest reported incidents of West Nile in our state. For hunters bringing dogs, be cautious of rattlesnakes as they can be quite prevalent.

There was good hunting to be found elsewhere, too, during the opening weekend. Colorado Parks and Wildlife District Wildlife Manager Mason Allen, from the Sterling area, checked numerous hunters who had good numbers of bagged birds with several having reached their limit. Allen recommended any areas which contain the big three for doves: water, canopy (i.e. trees) and sunflowers.

“The majority of successful hunters I checked on our state walk-in and wildlife management areas found the best shooting from sunrise to midmorning and those who stayed in the field through the morning came out with good bag numbers, even some limits,” he said. “This year’s bird numbers are about par compared with past seasons, and I’d recommend hunters try walk-in areas south of Yuma and Wray to just south of Brush.”

The Colorado Wildlife & Parks website at http://cpw.state.co.us/ containing a plethora of good information dedicated to dove hunting. It’s well worth checking out in advance of your hunt.

This entry was posted in hunting and tagged colorado hunting, dove hunting. Bookmark the permalink.